New York has a lavish oyster tradition that continues to this day as we serve shellfish to our patrons around Bay Shore. The oyster industry has been so influential in NYC that we even have entire buildings made from oyster-shell mortar paste. In this post, we’ll discuss the oyster history and why you should visit Salt & Barrel for the highest quality shellfish from all around the country. 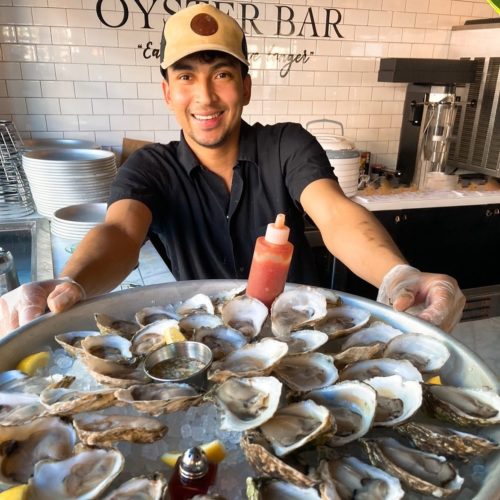 At one time, the once pristine New York Harbor was home to massive oysters, some that were as much as 10 inches long; gigantic by today’s standards. That’s what it was like in the 1600s before centuries of heavy harvesting.

Before pizza and hotdogs were a staple crop, New Yorkers had plenty of oysters by the half-shell. One reason for this is because Dutch explorers came here in search of clams and pearls, but found “Little Oyster Island” and “Great Oyster Island” instead. Those were early monikers for Ellis Island and Liberty Island respectively, oyster beds that yielded millions to billions of oysters.

Blue Point Oysters & the History of the Salt & Barrel Bar

Have you heard of Connecticut Blue Point Oysters? These are the ones we serve, which have effectively put us on the map as an exquisite seafood dining establishment in Bay Shore. We get a steady supply of these spectacular oysters between the months of April and September when they’re at peak freshness.

They’re among the most popular oysters in the country because of their delectable, slightly salty flavor. You get a solid and meaty oyster here. While nothing matches those massive oysters from the 1600s, the Blue Point variety is usually three or four inches long. So, if you order just a few of them, they make for an outstanding starter.

Salt & Barrel was established in 2016, and our first passion is serving local oysters from the Great South Bay and beyond. Throughout the years we’ve had the pleasure of working with East and West Coast farmers to serve the most popular delicacies of the sea.

If you’re an oyster enthusiast, you don’t want to miss your chance to enjoy them with us during Happy Hour. 3-6:00 pm every day except Tuesdays. Not only are our oysters half-price, but so are select drinks, taps, and wines. Join us every Thursday for an extended happy hour that starts at 3:00 and rolls all night long.

Please join us for good times, smart cocktails, and local Coastal Fare at Salt & Barrel. If you’d like to dine with us contact us at 631-647-8818 or book on Open Table. For take-out visit Chow Now and for current news, tap into our Instagram! See you out there!